Here’s a video clip of The Internationale being sung in the face of fascistic terror in Tiananmen Square in June 1989, thirty years ago.

Its spirit lives on!

Nothing much changed except Ides of March now looms before April Fools Day.

Everything has continued to develope along the lines explained in that article.

Most likely outcome seems to be an overwhelming Parliamentary vote endorsing the only “deal” available, subject to a referendum with the option to reject the only deal and consequently remain in the EU. The EU will certainly agree to an extension of the deadline to allow the referendum to resolve the issue.

That is clearly what the Government has openly been aiming for, with only a pointless token pretense of some third option resulting from imaginary further negotiations with the EU or a widely believed but completely ludicrous imaginary threat to leave with no deal by April Fool’s Day.

Parliament has spelled out that no deal is not an option and could enforce that if necessary. The government would not refuse assent by the Crown even if it voted against such legislation. I doubt that such legislation will be necessary as the ritualistic threats of no deal are basically over already.

The Government has spelled out that the only other options are the current deal agreed with the EU or cancelling Brexit.

The hard core Brexiteers were always a minority and are now totally isolated. They lied about what the options were in the previous referendum and they, along with everybody else, have now been clearly told what the actual options are. Whatever they do there will be little damage done by their “outrage”.

Given the alternative of becoming a vassal state of the EU and nobody seriously supporting that, lots of people who previously voted for Brexit can be expected to just stay home muttering rather than turn up at the referendum to vote against remaining. The remainers can be expected to turn up in larger numbers and are already a majority in polls.

If unexpectedly the vassal state option wins there will be no great damage done. Just further humiliation for the Brexiteers eventually ending up either rejoining an EU that has meanwhile benefited from the absence of a British veto on deepening the union or agreeing on some less humiliating BRINO more like Norway (and rejoining free movement of labor).

Other alternatives still possible, but I don’t see any reason for a successful no confidence vote in Parliament that could result in an early election.

Theresa May has won and both Corbyn and the Tory Brexiteers have lost.

Politics today frequently makes me think I’m in the Twilight Zone. The words were made famous by a television anthology series that I loved in the 1960s and continue to re-watch today (on DVD). It dealt with bizarre and fantastic themes, often in a social realist setting and with a twist at the end.

Rod Serling, the show’s creator and main writer, was a small ‘l’ liberal. He was progressive on some key issues in the 1950s and 1960s, such as civil liberties and opposition to racism, and opposition to the US war in Vietnam. I’ve read a few biographies about him and he was an internationalist, cosmopolitan, opponent of tyrants and supporter of basic democracy: all values that Trump opposes. Serling would be in the globalist camp today. 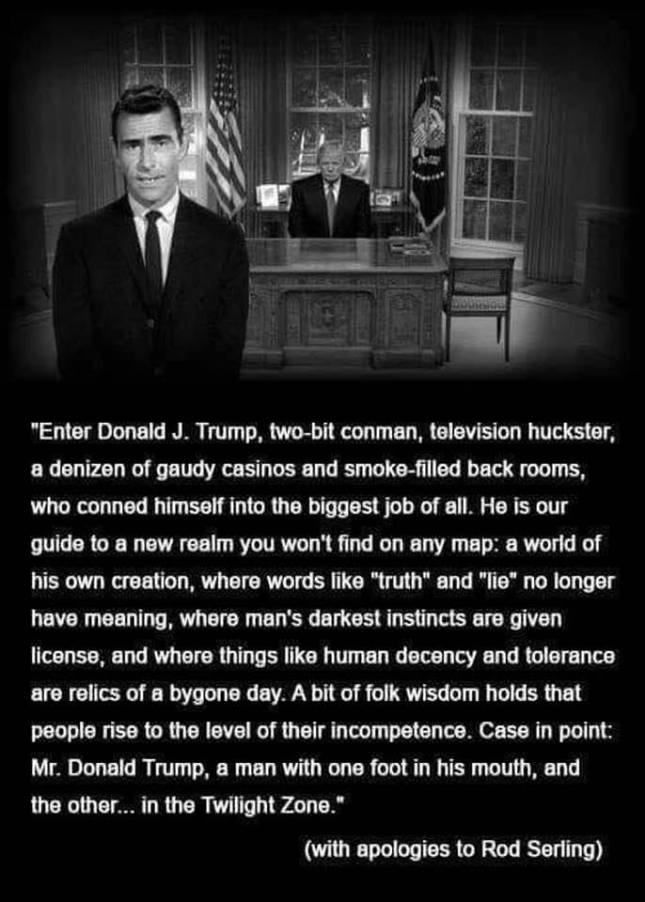 With the general collapse of mainstream politics it is not surprising that both politicans and journalists are completely ignorant of current constitutional arrangements.

But we have now got to the point where Constitutional lawyers are also clueless.

Here is one arguing that the Government would be “mad” not to allow enactment of the “medevac” legislation approved by both Houses of Parliament.

But here is the ignorance:

“There is a reason why there is no precedent of a government in the UK or Australia advising the refusal of assent in such circumstances. It would not only be a constitutionally dubious thing to do, but would also be politically stupid.”

Actually there is a precedent in Australia. I do not have time to look it up but a Government bill that had passed both houses of the Commonwealth Parliament was subsequently refused assent simply because the Government had changed its mind.

The whole point of the consent of the Executive Government being required for legislation has little to do with anachronistic survivals of monarchy. In a crowned republic or “constitutional monarchy”, just as in any other form of government, enacting laws opposed by the executive responsible for enforcing them only invites trouble.

The reason there are few precedents is simply that the anachronistic single member electorates produces a two party system in which the largest party usually has a guaranteed majority. With a genuinely representative legislature it would be quite normal for governments to be faced with bills passing that they have to decide whether to enact or not and face the consequences of their decisions, including the possibility of ceasing to be the government.

The actual “constitutional” situation is that the government made a political decision to enact this legislation.

Both parties agree on a policy of destroying the boats that refugees arrive in to increase the cost of transport so as to insulate an island continent from the large refugee flows faced by much poorer countries with land borders such as Pakistan and Iran. This naturally resulted in use of cheap unseaworthy boats, which resulted in deaths at sea. Both parties want to pretend that they are locking people up outside Australia to prevent deaths at sea caused by the criminal policies they actually both support.

But they both need to keep up the “debate” between them and keep that debate away from the criminal policy of destroying the boats that people flee in.