The nuclear disarmament movement went through different phases during the post-War decades and reached a peak in the 1980s when huge demonstrations involving millions of people took place internationally.

There was a lot of fear about the ‘inevitability’ or ‘imminence’ of nuclear war between the superpowers and some prominent campaigners believed that humanity would be wiped from the face of the planet in such a war. Saner people, on the left, argued against this hyperbole but, of course, supported the demand for nuclear disarmament.

One of my comrades was so freaked out by the inevitability of nuclear war in the late 1970s/early 1980s that they uprooted themselves from city life and moved to the furtherest country town from their city of residence. The CPA(ML) leaders warned not only that it was imminent but that fascism was just around the corner too. (It would have been a lot scarier had said leaders not been losing credibility at a rapid rate).

In light of the internationalist mass movement, united by a progressive demand, the good people at the journal ‘Bowyang’ decided to launch a special edition focusing on it. I happened to be ‘guest editor’ for that issue, as the real editor, Humphrey McQueen, was overseas.

That issue of Bowyang, published in 1983, is a period piece (the nuclear disarmament movement is rarely heard of today) but valuable as an expression of the different perspectives on the movement.

As guest editor, I invited Albert Langer (as he was known at that time) to contribute an article. It makes worthwhile reading today. Certainly, nuclear war never took place. Today, globally, there are about 15,000 weapons – which is better than the 62,000 of thirty years ago. The trend is for their continuing decline through treaties and agreements.

I’m republishing Arthur’s article out of historical interest but also for its valuable insights.

The author was wrong in 1983 about an economic crisis greater than the last Depression looming on the horizon – but weren’t we all? (It does seem the case now, though. No, really!)

‘Old habits die hard… It is hardly surprising that every pathetic twitch the US makes to shore up its position in El Salvador or elsewhere is seen, no matter how ludicrously, as the beginnings of another Vietnam’.

That old habit is yet to die and has led to many who identify as leftists supporting the wrong side in regional conflicts, especially Iraq and Syria.

But one thing has been established: yes, Mao was right, nuclear weapons are paper tigers! 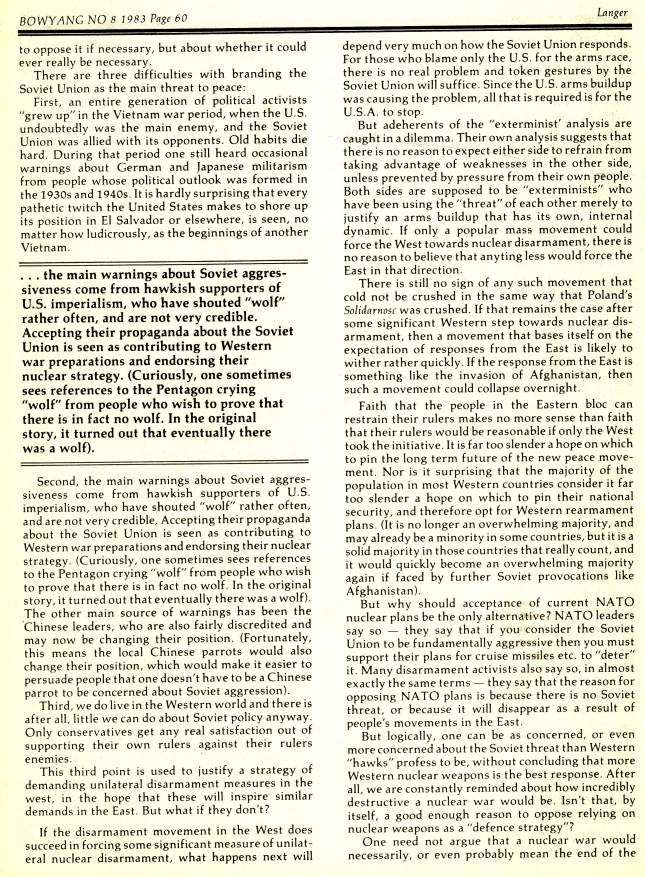 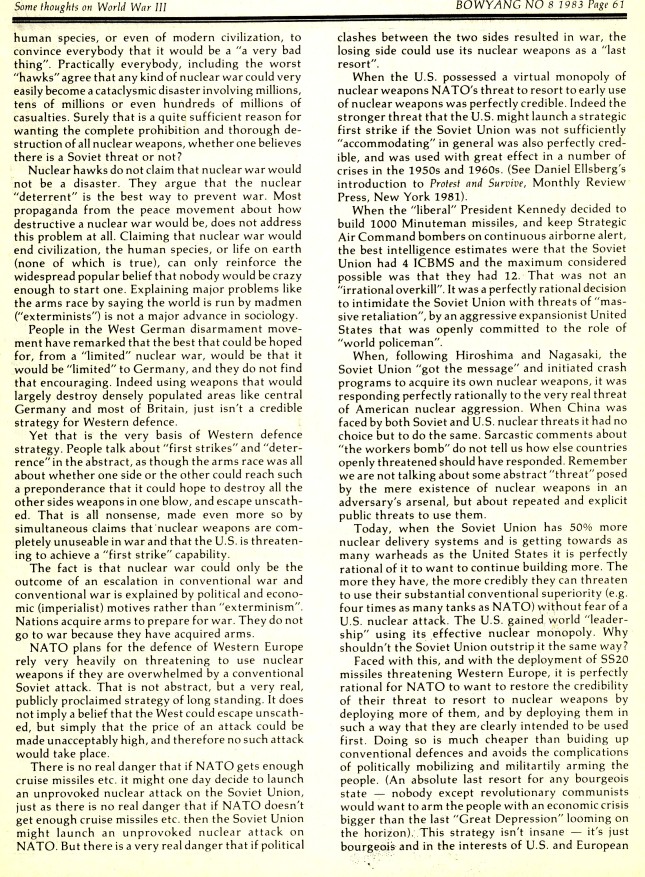 (I have several spare copies in very good condition, if anyone would like a copy – contact me via this blog).