The notion of opening borders is no longer a fringe idea of those on the Marxist Left and classical liberal Right. It has been implemented by Europe’s power-house and, to her great credit, Germany’s Chancellor Merkel is standing by her policy. And recent state elections and opinion polls show that the German people are not repudiating her. 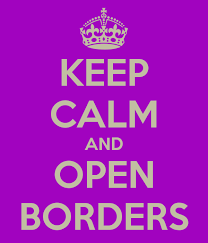 The Christian Democrat Chancellor of Germany, Angela Merkel, opened Germany’s borders to more than a million asylum seekers, mostly those fleeing the barrel bombs of the fascist regime in Syria.

The recent elections in three German states resulted in a new right-wing party, the AfD (Alternative fur Deutschland) which opposes the ‘open borders’ policy, receiving 25% of the vote in one electorate, 15% and 12% in the other two.

Googling ‘Merkel’ and ‘elections’, the headlines overwhelmingly suggest this is a defeat for Merkel’s open borders policy: a “disaster” for her. She has been “punished” by the voters for her open borders’ stance. So say the media headlines.

Yet further examination of the actual results in the three electorates – Saxony-Anhalt, Rhineland-Palatinate and Baden-Wuerttenberg – indicate that the results are a defeat for those who claimed the new party represents the silent majority.

In the elections, opponents of Merkel’s policy had their chance to test public opinion. And the result shows that they are marginal, averaging less than 15% of the vote.

It is true that the Christian Democrats, Merkel’s party, were defeated in Baden-Wuerttenberg. But they lost to the Green Party, which supported Merkel’s policy. Yes, they lost in Rhineland-Palatinate to the Social Democrats but the Christian Democrat candidate, Julia Klockner, stood as an opponent of her party leader’s open borders stance. The Social Democrat candidate was more favourably disposed to it.

In Saxony-Anhalt, the AfD did well with a quarter of the vote, but Merkel’s party came first with only a minor reduction in the Christian Democrat vote.

Moreover, opinion polls find that Merkel’s popularity hovers around the 50% mark. Currently, her approval rating is 54%.

A poll of voters about refugee policy in the three electorates found that Merkel’s approval rating is 58% in Rhineland-Palatinate, 54% in Baden-Wuerttenberg and 43% in Sachsen-Anhalt.

So, here we have a Chancellor who has shown that borders can be opened and, despite the inevitable chaos, the masses do not run from that Chancellor and her policy in anger and fear. Only a minority does that.

What Merkel has done is to change the paradigm of the debate over immigration and borders. Not just in Germany but everywhere.

The notion of opening borders is no longer a fringe idea of those on the Marxist Left and classical liberal Right. It has been implemented by Europe’s power-house and, to her great credit, Chancellor Merkel is standing by her policy. And the German people are not repudiating her.

She understands that ‘they’ are ‘us’ and ‘we’ are ‘they’, and that sharing the chaos does not preclude supporting measures to tackle the problem at its main source: the Assad regime.

She recently said that a million people is not many when you consider that Europe’s population is 500 million. The pity is that other governments are closing their borders rather than sharing the chaos caused by barrel bombs in a not-too-distant land.

17 thoughts on “Opening the borders – is it really unpopular?”