“If there was a left, we would be in a good position to finally rid ourselves of the pseudo-left who can be shown to espouse essentially the same anti-globalist and isolationist ideas as Trump. But in order for there to be a left, we have to be able to present a coherent economic program that explains how to unleash the productive forces of a globalized world for the benefit of the majority who only work here rather than primarily for the owners”. 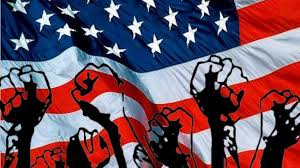 Even if I had a deep understanding of US and world politics and economics I could not hope to figure out what’s happening at the moment. We are at an important turning point in multiple processes, many of them dependent on unknowable contingencies.

But here’s an outline of some aspects that mass media analysts don’t seem to get.

The big event was Trump beating the entire Republican establishment as a complete outsider in a hostile takeover. Most attention has been directed at the subsequent defeat of the Democrats and the wailing and gnashing of teeth from their celebrities and media. But the situation on the Republican side is far more interesting.

Instead of splitting they have jointly celebrated defeating the Democrats and appear to have successfully formed a united administration. Both sides are indeed glad to be rid of the Democrat administration and can work together for reduced taxes, less regulation and some other points of agreement. It is also quite traditional for Republicans to accept budget deficits as long as they are not funding a Democrat administration. But the fact remains, President Trump has no party in Congress. They despise him and are cooperating only because they fear him.

Trump’s focus is on building his own party. If he had lost the primaries he looked like running as a third party (which he tried to do decades ago). If he had won the primaries but lost the election he would still have been at war with the Republican establishment, who could reasonably be accused of having treacherously helped the Democrats to win by attacking their own candidate. Having won, without any help from most of the Republican establishment he is now in a much stronger position to actually take over their party. If he doesn’t, they will find a way to get rid of him.

All members of the House of Representatives and one third of Senators come up for election in two years, together with State legislatures and governors. The mid-term primaries start in a year. Trump’s campaign organization has databases with more than 10 million email addresses and 2 million donors. Trump’s campaign more than doubled the numbers voting in Republican primaries (many of them former Democrats). Usually only small numbers participate in mid-term primaries and they are mainly mobilized by actual party activists – especially cronies of the local incumbents.

If Trump can keep his base mobilized over the next two years he will end up with a large party in Congress (and in the States) whether or not the Democrats regain majorities.

The media and celebrities are still helping by denouncing him as a deplorable outsider. That’s exactly what he wants to keep his base mobilized. He won because so many people are utterly sick of politically correct plastic insiders.

As far as I can make out the media actually do not get this. It is plausible that when they gave him enormous amounts of free publicity in the primaries they were consciously intending to help him beat the other candidates so that the Republicans would nominate a grotesquely deplorable candidate who would lose the election. But they actually seem to think it really matters that he has become more unpopular since the election under their onslaught. His popularity among Republican voters is what matters for the primaries and he is not harmed at all by attacks from media and celebrities.

So here’s one possible sequence of events.

Congress approves a fairly large infrastructure stimulus program and deficit as well as funding construction of a secure southern border and improved healthcare. Republican defectors would be outnumbered by Democrat collaborators.

Together with tax cuts and deregulation this has the expected effect of increasing GDP growth and thus jobs and wages at least in the short term. If Trump actually launched trade wars that could produce the opposite effect, even in the short term. But he can start lots of trade disputes that build momentum against globalism without actually initiating a trade war.

So Trump will be seen as having delivered. Many of his opponents will be removed in the primaries.

Hispanic hostility and Democrat mobilization against Trump’s immigration program won’t have much impact on Republican primaries since few Hispanic voters would register as Republicans. But this issue could win seats for Democrats at the midterm elections.

Assuming the Democrats get their act together and stop carrying on the way they are at the moment, they should be able to mount a serious campaign to win back majorities in the House and Senate at the midterm elections. But to do so they would presumably go with Trump’s trade policies, denouncing him for having not gone far enough. After all Bernie Sanders was a serious challenger to Hilary Clinton with protectionist policies (and against open borders) and Clinton actually announced opposition to the TPP in response. Arguably he could have defeated Trump.

In three years or so Trump could announce that the border was now secure enough to offer a path to citizenship for undocumented immigrants without risk of encouraging more. That could produce a significant hispanic vote for a President that had actually delivered rather than merely attempted comprehensive immigration reform.

A major world economic crisis could break out at any time. I would be surprised if it was postponed for another 8 years. So I would also be surprised if an authoritarian demagogue was not President of the USA when it does break out.

The collapse of the old parties and their plastic politicians extends far beyond the USA. Lots of people are being drawn into thinking about politics for the first time. Their first thoughts are abysmally stupid and make them vulnerable to demagogues spouting nationalism and nativism. But many will end up thinking more deeply now that they have begun thinking.

If there was a left, we would be in a good position to finally rid ourselves of the pseudo-left who can be shown to espouse essentially the same anti-globalist and isolationist ideas as Trump. But in order for there to be a left,we have to be able to present a coherent economic program that explains how to unleash the productive forces of a globalized world for the benefit of the majority who only work here rather than primarily for the owners.

61 thoughts on “Notes on Trump (by Arthur Dent)”