“It’s time to become a revolutionary hero!” Tang thought, evoking the heroic tales from her textbooks of communist martyrs who were killed in the civil war, or by the invading Japanese. 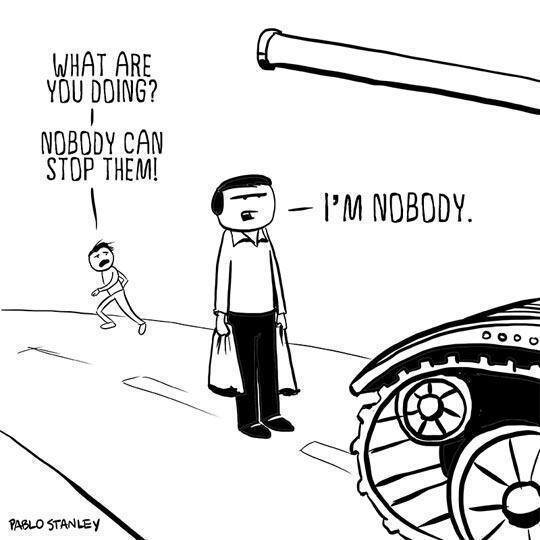 The iconic image of a heroic rebel blocking a tank in Tiananmen Square 30 years ago is inspirational to any people, anywhere, fighting oppression. The identity of that person, and what became of him, are unknown. In that sense, he is ‘nobody’.

Of course, an individual can’t overthrow tyranny but, as history shows, you need masses of people with courage and willingness to make sacrifices under certain circumstances.

I came across this cartoon at the facebook page of Rose Tang, a veteran of Tiananmen Square. Her reminiscences of the event are worth reading.

‘Nobody can change anything’ – ‘nothing changes’ – are catch-cries of conservatism. The preference for stability, even under conditions akin to fascism, is also a hallmark of the pseudo-left. It is a particularly obnoxious attitude when those expressing it do not live under such conditions but the under the more preferable situation of bourgeois democracy.

We are indeed all nobody. Together, as nobodies, we can win the world!

And never forget: the young rebels in the Square 30 years ago included ‘The Internationale’ among the songs of defiance they sang.